Over 40 years’ experience in the US (first approved in 1977 for metastatic breast cancer).

In women with ER-positive or ER-unknown breast cancer:

Overview of Pooled Studies of Adjuvant Treatment of Breast Cancer

The 10-year outcome data were reported in 1998 for 36,689 women in 55 randomized trials of another formulation of adjuvant tamoxifen using doses of 20 to 40 mg per day for 1 to 5+ years. Twenty-five percent of patients received 1 year or less of trial treatment, 52% received 2 years, and 23% received about 5 years. Forty- eight percent of tumors were estrogen receptor (ER)- positive (>10 fmol/mg), 21% were ER-poor (<10 fmol/mg), and 31% were ER-unknown. Among 29,441 patients with ER-positive or ER-unknown breast cancer, 58% were entered into trials comparing tamoxifen to no adjuvant therapy and 42% were entered into trials comparing tamoxifen in combination with chemotherapy vs. the same chemotherapy alone. Among these patients, 54% had node-positive disease and 46% had node-negative disease.

In women with ER-positive or ER-unknown breast cancer:

The effects of about 5 years of tamoxifen on recurrence and mortality were similar regardless of age and concurrent chemotherapy.

The 15-year outcome data were reported in 2011 for 21,457 women in 20 randomized trials, and continued to confirm the earlier overview results. Five-year treatment with adjuvant tamoxifen reduced the 15-year risks of breast cancer recurrence and death.

Although results of the NSABP B-14 study suggest that continuation of therapy beyond five years does not provide additional benefit, a subsequent report of the ATLAS trial suggest that continuing tamoxifen to 10 years further reduced recurrence and mortality.

More on Duration of Therapy

Available data supported 5 years of adjuvant tamoxifen therapy for patients with breast cancer. In the EBCTCG 1995 overview, the reduction in recurrence and mortality was greater in those studies that used tamoxifen for about 5 years than in those that used tamoxifen for a shorter period of therapy. Although results of the NSABP B-14 study suggest that continuation of therapy beyond five years does not provide additional benefit, a subsequent report of the ATLAS trial suggest that continuing tamoxifen to 10 years further reduced recurrence and mortality.

In a Swedish Breast Cancer Cooperative Group trial of another formulation of adjuvant tamoxifen 40 mg per day (two times the recommended dosage) for 2 or 5 years, overall survival at 10 years was estimated to be 80% in the patients in the 5 year tamoxifen group, compared with 74% among corresponding patients in the 2 year treatment group (p = 0.03). Disease-free survival at 10 years was 73% in the 5 year group and 67% in the 2 year group (p = 0.009). Compared with 2 years of tamoxifen treatment, 5 years of treatment resulted in a slightly greater reduction in the incidence of contralateral breast cancer at 10 years, but this difference was not statistically significant.

5 Years vs. Longer Duration In the ATLAS trial (Adjuvant Tamoxifen: Longer Against Shorter), 6,846 women with early breast cancer and ER-positive disease who had completed 5 years of treatment with another formulation of tamoxifen were randomly allocated to continue tamoxifen to 10 years or to stop at 5 years. The cumulative risk of recurrence for women randomized to continue tamoxifen was reduced during years 5-9 [recurrence rate ratio of 0.90 (95% CI: 0.79, 1.02)] and further reduced in later years [0.75 (95% CI: 0.62, 0.90)]. Breast cancer mortality in women who received tamoxifen for up to 10 years was also reduced by about 13% [HR = 0.87 (95% CI 0.78, 0.97)].

The tamoxifen and placebo groups were balanced for baseline demographic and prognostic factors. Over 80% of the tumors were less than or equal to 1 cm in their maximum dimension, were not palpable, and were detected by mammography alone. Over 60% of the study population was postmenopausal. In 16% of patients, the margin of the resected specimen was reported as being positive after surgery. Approximately half of the tumors were reported to contain comedo necrosis.

Results are shown in Table 6. At 5 years from study entry, survival was similar in the placebo and tamoxifen groups. 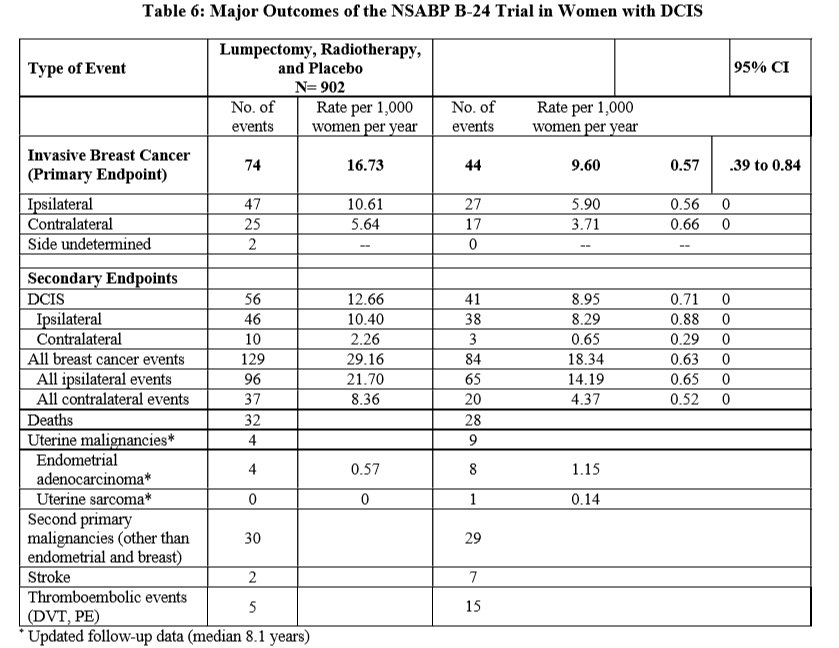 Reduction in Breast Cancer Incidence in Women at High Risk

The Breast Cancer Prevention Trial (NSABP P-1) was a double-blind, randomized, placebo-controlled trial with a primary objective to determine whether 5 years of another formulation of tamoxifen therapy (20 mg per day) reduced the incidence of invasive breast cancer in women at high risk for the disease. Secondary objectives included an evaluation of the incidence of ischemic heart disease; the effects on the incidence of bone fractures; and other events associated with the use of tamoxifen, including endometrial cancer, pulmonary embolus, deep vein thrombosis, stroke, and cataract formation and surgery.

The Breast Cancer Assessment Tool1 (the Gail Model) was used to calculate predicted breast cancer risk for women who were less than 60 years of age and did not have lobular carcinoma in situ (LCIS). The following risk factors were used: age; number of first-degree female relatives with breast cancer; previous breast biopsies; presence or absence of atypical hyperplasia; nulliparity; age at first live birth; and age at menarche. A 5-year predicted risk of breast cancer of ≥1.67% was required for entry into the trial.

The demographic characteristics of women on the trial with follow-up data are shown in Table 7. 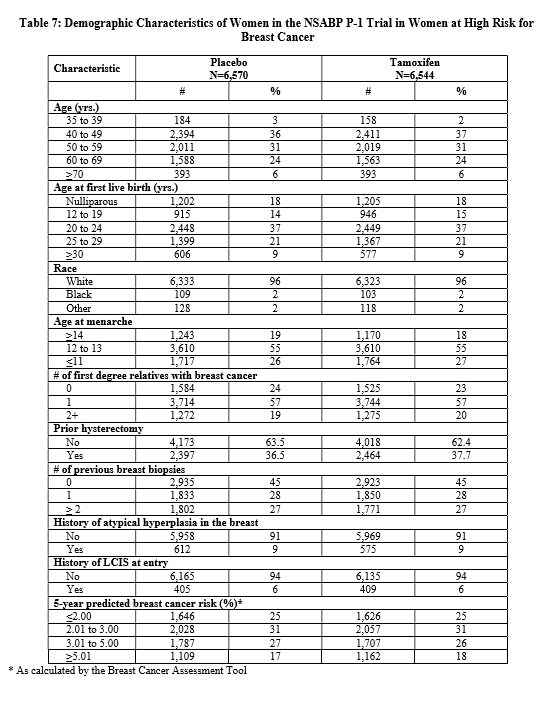 There was no statistically significant difference in the number of myocardial infarctions, severe angina, or acute ischemic cardiac events between the two groups (61 tamoxifen, 59 placebo; RR = 1.04, 95% CI: 0.73 to 1.49).

Although there was a non-significant reduction in the number of hip fractures (9 on tamoxifen, 20 on placebo) in the tamoxifen group, the number of wrist fractures was similar in the two treatment groups (69 on tamoxifen, 74 on placebo). A subgroup analysis of the trial suggested a difference in effect on bone mineral density (BMD) related to menopausal status in patients receiving tamoxifen. In postmenopausal women, there was no evidence of bone loss of the lumbar spine and hip. Conversely, tamoxifen was associated with significant bone loss of the lumbar spine and hip in premenopausal women.

Characteristics of the Breast Cancers in the NSABP P-1 Trial 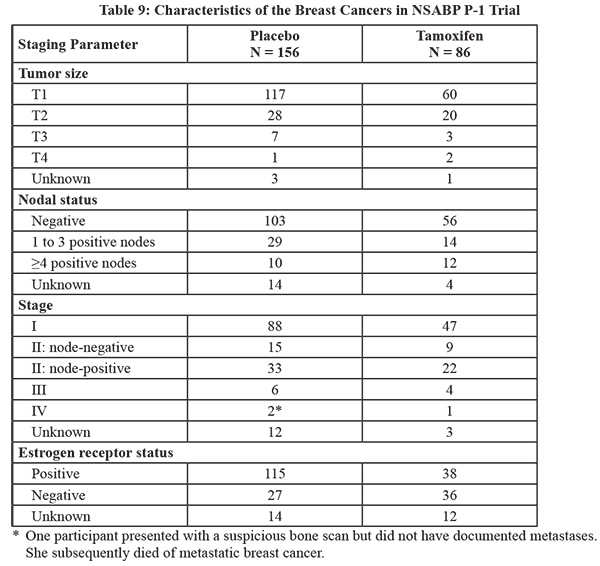 The 7-year follow-up for the NSABP P-1 trial confirmed the initial findings. The cumulative rates of invasive and non-invasive breast cancer were reduced with tamoxifen. The risks of stroke, deep-vein thrombosis, and cataracts and of ischemic heart disease and death were also similar to those initially reported. Risk of pulmonary embolism were lower than in the original report, and risks of endometrial cancer were higher, but these differences were not statistically significant.

Three prospective, randomized studies compared another formulation of tamoxifen to ovarian ablation (oophorectomy or ovarian irradiation) in premenopausal women with advanced breast cancer. Although the objective response rate, time to treatment failure, and survival were similar with both treatments, the limited patient accrual prevented a demonstration of equivalence. In an overview analysis of survival data from the 3 studies, the hazard ratio (HR) for death (tamoxifen/ovarian ablation) was 1.00 with two-sided 95% confidence intervals (CI) of 0.73 to 1.37. Limited number of patients with disease progression during tamoxifen therapy responded to subsequent ovarian ablation.

Published results from 122 patients (119 evaluable) and case reports in 16 patients (13 evaluable) treated with another formulation of tamoxifen have shown that tamoxifen is effective for the palliative treatment of men with metastatic breast cancer. Sixty-six of these 132 evaluable patients responded to tamoxifen, which constitutes a 50% objective response rate

You are encouraged to report negative side effects of prescription drugs to the FDA. Visit www.fda.gov/medwatch, or call 1-800-FDA-1088.